The Return to Europe

Alois Springer faced the question whether to stay in New York or return to Europe. Attractive though the New York Philharmonic may be – two occurrences appeared that spoke for Europe.

First of all Alois Springer still had to redeem part of the prize he had won in the competition “Concerts of Young Artists“ in Hannover, namely his debut with the Radio-Symphony-Orchestra Berlin. This was described as sensational by the press. The media effusively celebrated his performance with Robert Schumann’s piano concerto and “La Valse” by Maurice Ravel as the future conducting hope. 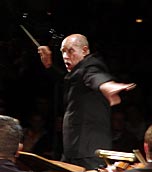 Secondly, at the same time Alois Springer received the tempting offer to become chief conductor of the Philharmonia Hungarica at the age of 33. These former members of the Philharmonic Orchestra from Budapest, who had emigrated during the Hungarian Rebellion in 1956 and had been supported by the Federal Republic of Germany until the Reunification, were indeed one of Europe`s most famous symphony orchestras.

For Alois Springer, it was not an everyday chance and challenge.

Chief Conductor of the Philharmonia Hungarica

As chief conductor of the Philharmonia Hungarica, Alois Springer was now able to gather all the great musicians whose esteem and friendship he had gained all over the world, among them especially Pierre Fournier and Yehudi Menuhin. Claudio Arrau, the last century`s famous pianist, remarked on Alois Springer: „… he possesses a phenomenal memory, perfect biological condition, the overwhelming ability to communicate with any orchestra, a clear conception as well as skill to realise the emanation of sound of every masterpiece, and the talent to transfer this into reality with every orchestra.“

With this fascinating body of sound of the Philharmonia Hungarica, Alois Springer could convert the sound after which he had unperturbedly gone up to this point . A busy national and international concert activity started with this orchestra. On tour around the world, Alois Springer was able to enhance the reputation of the Philharmonia Hungarica as an exceptional body of sound in Germany and the free world. 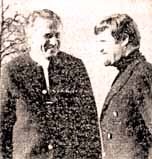 Due to the large number of successes, large concert halls with their famous symphony orchestras in East and West, several radio stations as well as record labels opened their doors to Alois Springer .Thus he conducted the Hamburg Symphony Orchestra, with whom he conducted several recordings in Hamburg`s music hall. Furthermore,he conducted the Südwestrundfunk (Radio- Symphony-Orchestra), the Pforzheim Chamber Orchestra as well as the Sofia Philharmonic and other great orchestras of Eastern Europe. He produced the historical recordings of the entire 104 Haydn symphonies for the record label DECCA in cooperation with Antal Dorati. He rehearsed various works with the Philharmonia Hungarica for the American company Vox Turn-about, e.g. the piano concerto in G-major by Maurice Ravel, with Maria Littauer.

On Dec. 18, 2000, he returned to the Philharmonia Hungarica (about to be dissolved), for a final concert, after thirty years of international concert-work with all kinds of orchestras all round the world.

After these thirty years he was again celebrated by audience and press alike.

With this concert, Alois Springer completed a creative circle, and the era of the Philharmonia Hungarica ended.

After years of success you might think it would have been time for Alois Springer to take a rest. But he already had new, equally ambitious, tasks in mind.